Some of my large matted and framed thread paintings can now be purchased at the artisan district ( formerly Botanicals) 610-612 Queen Street Fredericton NB.  Hours are Tues.- Sat. 10-5 and Fri. 10-6. 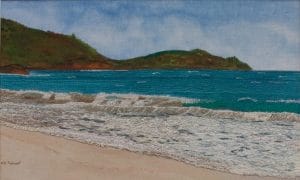 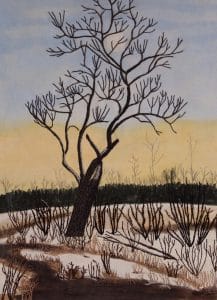 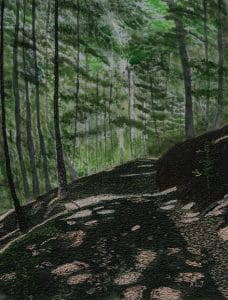 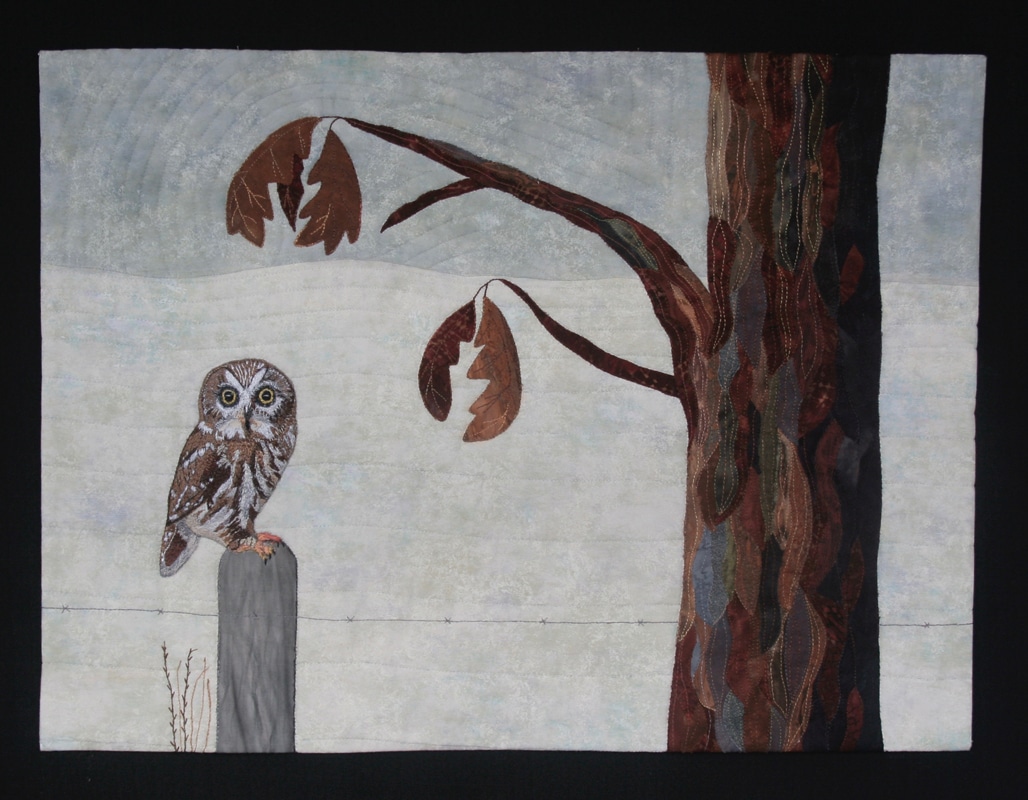 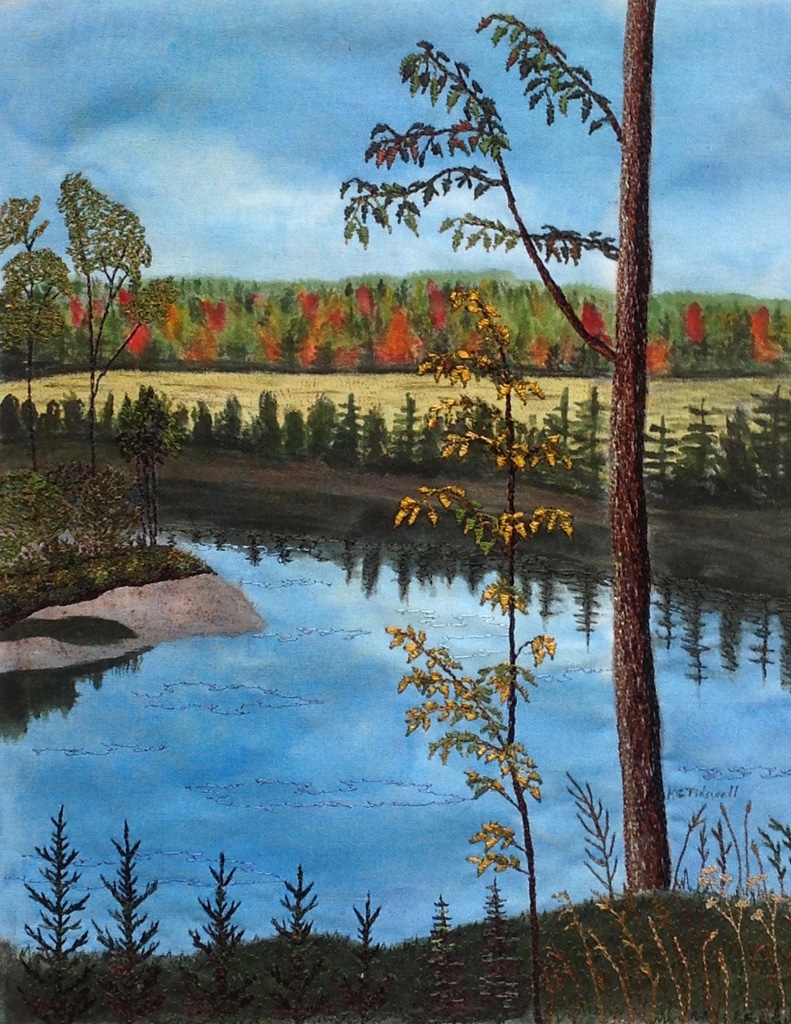 Today I finished a thread painting of the Keswick River in autumn which was commissioned this summer. My process is to paint the background and then enhance the detail by adding texture using the needle on my sewing machine like a paint brush.

The first photo shows the scene as I finished the painting and the second reveals the finished piece before it goes to the framer for stretching, matting and framing. 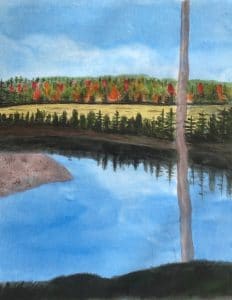 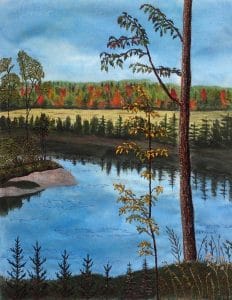 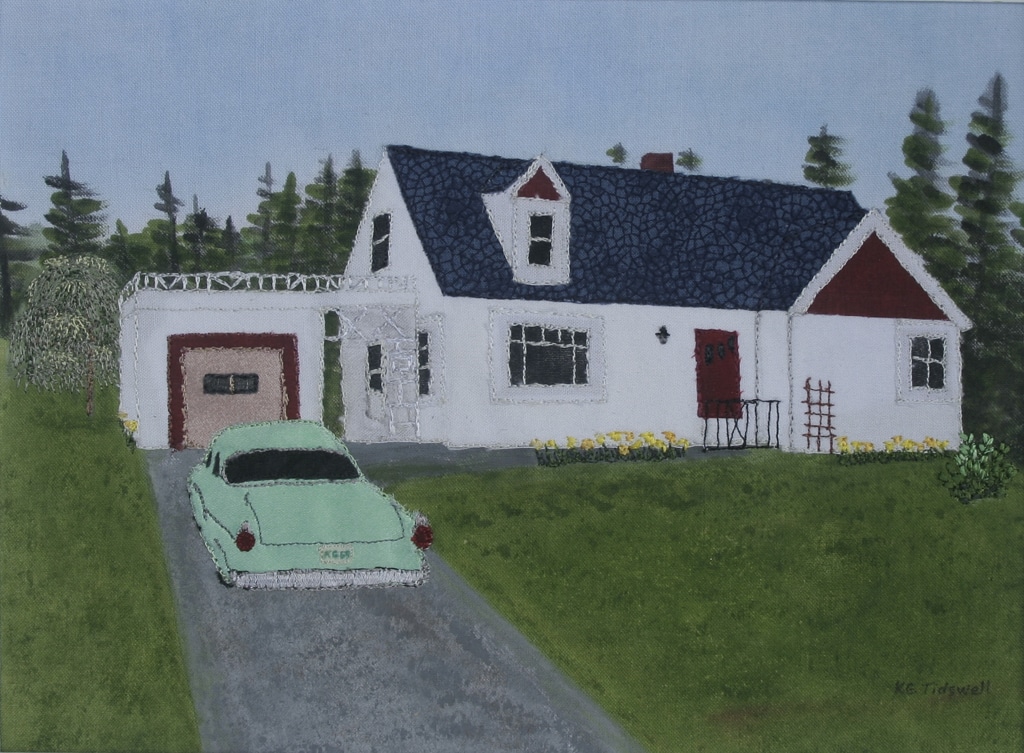 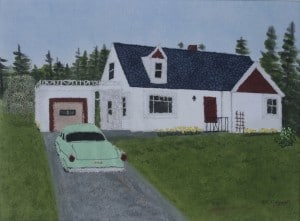 I wanted to create something for my sister and brother-in-law’s 50th wedding anniversary but was stumped as to what to make.  Some friends in my garden club suggested I make a picture of the family home which we had sold in January after the death of our dad. My husband objected that this would have no significance to my brother-in-law but suggested  that if I included the car he would have been driving while “courting”, it would be meaningful to them both.

With some help from my niece, I tracked down the year and model of the car (1956 Ford custom.) The internet made it relatively easy to get a picture although there weren’t many with the rear view that I wanted. I remembered the car and knew it was a light green. I painted some polyester fabric for the car so it would have a sheen.

Using an older photograph, I tried to create the house and yard of our youth. I drew the house and made appliqué patterns. I painted a background which included a willow tree that had died many years ago and a snowball bush that my mother had loved and my father hated. I appliquéd the pieces using free motion embroidery and added a few flowers and the willow and snowball.  For the final touch I placed the car in the driveway.
I had it framed under glass so the photo is before it went to the framer’s.

The anniversary party was attend by a huge number of people so we decided to give family gifts at a restaurant the next day. I was pleased with their reaction although my brother-in-law didn’t have his glasses on so it was my sister, Karen, who first spotted his car.  Her reaction was heartwarming.  Karen said it showed how much he liked it when, after the meal, he  took it around showing it off to the waitress and the other people in the dining room.